Early morning awakening to
beautiful memories in frothing bubbles threaten to blind me with joy and sadness.

To hold just one with my gaze
is to hold water in my hands.

Simple, not easy, acceptance will come.

“Remember me, even if it’s only in a corner and secretly. Don’t let me go.”
~ Carlos Ruiz Zafón, The Shadow of the Wind

Posted by Susan Ward at 8:29 AM No comments: Links to this post 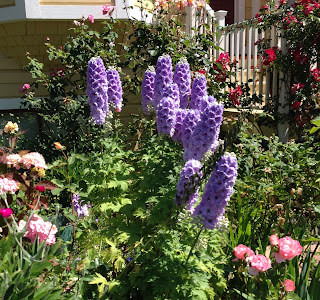 This short story was written for our January writer's group assignment.  The only parameters that we set for each other was to begin the story with 'Once upon a time...' and end it with '...they lived happily ever after.'

Once upon a time there was a young boy and a young girl who lived next door to each other at the end of a cul-de-sac. They should have been fast friends but they were definitely not. The cul-de-sac was quiet with manicured lawns and graceful trees. Every morning, each family swept their sidewalks and tidied their porches. When all was done, they met under a giant oak tree in the middle of the cul-de-sac with their tea and their coffee. On some days, especially in the summer when the sun was shining, the wind had breezed off into the city canyons and all the workers had gone to work these very orderly residents were treated to a concert. Not a real concert but the beautiful sounds of classical music drifting from the house at the top of the cul-de-sac. The young boy, tall for his age, with his long, dark curly locks and dressed all in black, was practicing his piano. His dream was to be a concert pianist and his grand piano of gleaming white set the stage for fulfilling such a dream. On such a day, he threw his patio windows wide and leaned into his music forgetting all about the world outside. Everyone, that is except one person, revelled in this concert, and a hush fell. Songbirds stopped twittering. Crows settled on fence posts to keep an eye on the gathering. Any errant breeze held it’s breath.Gossipy conversation beneath the tree ended. It was always a magical moment.

The one person who hated, absolutely hated, this calmness. This, this genteel, gauzy,… stupid …….she never had enough words to describe her feelings for this whole crazy 'thing'! One summer morning, when she heard ‘The Concert’ mesmerizing all of her neighbours, the young girl stamped her feet. She clenched her fists at her sides to stop from breaking something. She was about to race out the front door and scream at them all to stop. But then she had an wicked idea and the young girl loved wicked ideas. Taking the stairs two at a time to get to her bedroom, she had things to do. First, she checked herself in the mirror to be certain her hair was just perfect, her clothes were just perfect and her shoes were just perfect. From the corner of her room, she gathered up the item that would complete this wicked plan. Everything was ready. The young girl tiptoed out the front door. Quietly she sat on a stool she kept on the front porch and waited for the young boy to reach a pause, his hands gracefully lifted from the keyboard for only a moment.

The neighbours were horrified! Coffee cups and tea cups dropped in mid sip! Heads spun around to see the source of the offending noise. Crows crowed disdain and annoyance. The wind gusted in with a vengeance. The young girl, her shocking pink and very spiked hair, her torn jeans and military jacket in proper disarray and her army boots scuffed and worn, had crashed with her own vengeance from the front porch with her scratched and worn electric guitar!!!  Da-Da-Da Daaaa! Da-Da-Da Daaaa! And then her fingers moved with blinding speed over the strings, drowning out any more piano music from her next door neighbour. The young boy came suddenly to his open window ready to scream at the young girl to just stop! Suddenly he vanished  from the window. He waited for a pause in the music. Da-Da-Da Daaaa! Da-Da-Da Daaaa! His fingers flew through Beethoven's 5th Symphony, a piece he knew well. Once more a hush fell. The birds stopped twittering. The errant gust of wind went off to the next street. The crows in their shiny black suits just strutted up and down, heads bobbing in time, wings flapping with each beat of the music..

When the last notes of this magnificent symphony flew off into the grand oak tree gracing the cul-de-sac, silence was all that could be heard. The young boy stepped out on his patio and the young girl stood tall on her porch.  The smiled at each other, then at their audience and bowed. Stepping out onto the clean swept  sidewalk hand in hand, they smiled and bowed once more. The audience jumped to their feet and applauded wildly. Songbirds flitted, fluttered and twittered. The wind returned not as breeze or a gust but as a banner that heralded a grand moment in time. Crows soared up to the tallest fence to bow and bob to the young musicians. The simplicity of such a random melding of minds stunned everyone. And so all the residents of the Grand View Cul-de-Sac, especially the young boy and the young girl, lived happily ever after.

“Ah, music,” he said, wiping his eyes. “A magic beyond all we do here!”
~ J.K.Rowling, Harry Potter and the Sorcerer’s Stone

Posted by Susan Ward at 5:40 AM No comments: Links to this post 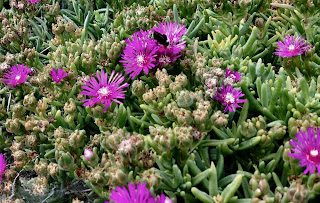 Yesteryear was full of hope and angst ~
promises made and promises kept
surprises burst upon us
some wonderful, some incredibly sad.
eleven days into New Year
with precious new babies in our midst
the sweet simplicity of life fills our New Year with joy, hope and love.

“Babies are such a nice way to start people.”
~ Don Herold

Posted by Susan Ward at 5:40 AM No comments: Links to this post

Threads of bright colour at sunrise
awaken the edges of our world
unspooling ribbons of pinks, reds and golds
with a simplicity growing in brilliance
then fading into clear blue or cloudy gray
only to returning in the evening
weaving threads of bright colour
to the darkening sky
at the setting of the sun.

“Let me, O let me bathe my soul in colours;
let me swallow the sunset and drink the rainbow.”
~ Kahlil Gibran

Posted by Susan Ward at 9:40 AM No comments: Links to this post

Book Review: The Promise of Canada - 150 Years People and Ideas That Have Shaped Our Country 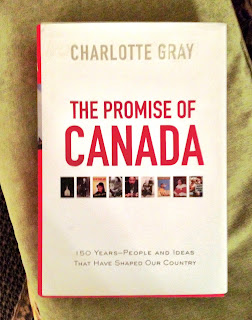 Intelligence and intuition has shaped our country, but was driven by the vision of many Canadians - some before Canada was born. I feel quite inadequate to write this review, but feel that The Promise of Canada by Charlotte Gray is an important piece of literature. From the vision and collaboration of George-Étienne Cartier and John A. MacDonald, the establishment of a federal police force in the Northwest Mounted Police, and the development of our provinces, Charlotte Gray only begins to show us that there has been so much more to the creation of the country that it is today. Simplicity has not been a watch word for all that has been accomplished. Literature and Canadian culture has been introduced and developed by artists such as Emily Carr and Margaret Atwood, along with publishing houses within our own borders. Universal medical care was created with the push by Tommy Douglas in Saskatchewan. Women’s Rights and Indigenous Rights have been discussed and debated and are hard won. Bertha Wilson was the first woman on the Supreme Court and Elijah Harper of the Red Sucker Lake First Nation said ‘no’ to the Meech Lake Accord and stood firm against his opponents in the Manitoba Legislature when he said ‘Our relationship with Canada is a national disgrace’. Charlotte Gray has peered beneath all the names and dates, and with her very astute researchers eye, has gleaned names and details that do not make the news. And still this is only a beginning.

I have never been a history buff, and was concerned that this book would not be of interest to me. I suppose that my high school experiences of memorizing dates and battles in countries that I really couldn’t relate to had something to do with that. However, this is one history book that I will keep in my collection, especially to read when the politicking and sound bytes gloss over the contributions that are are the meat of all that this country has become.

“There is no single story. Canadians have never been a homogeneous people,
and Canada has been under construction since its earliest days.”
~  Charlotte Gray

Title:  The Promise of Canada - 150 Years That Have Shaped Our Country 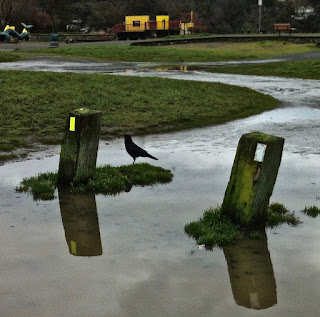 “But Uncle Norman, I don’t want to build character. I want to build a house…..not a real house but one from this kit I got for Christmas. And it’s dumb. How can you get a house from a bunch of popsicle sticks?”

Carson had a real pout on. He was bored and the kit was the only thing left for him to do. He had been having fun outside in the pouring rain jumping in puddles splashing from the grumpy, growling clouds. Once he was too cold and too wet, he came into the house. Now he was by the fire, had everything scattered all around him and here was his Uncle Norman talking about challenges and character.

“Well, what kind of research have you done?” Carson's Uncle Norman lowered his newspaper to talk with this favourite nephew.

“I guess that’s your challenge then. Finding an answer that makes sense for you. What about that computer you are always playing games on? Can you find any pictures that will help?”

Carson’s Uncle Norman was not that great on computers even though he had to use them at work - at least that was Carson’s opinion. Uncle Norman never, ever played any games, so how would he know anything.

Carson scrambled to his feet, raced upstairs to his room and thundered back down already opening his little device. Once he settled on the rug again, he tapped rapidly in the search engine.  He let out a happy, excited yelp. “The Simplicity Site! I forgot all about it. We use it at school all the time. Here it is, Uncle Norman….pictures. And even a video of a guy putting a popsicle stick house together.”

Carson bent over his project, following the video and the directions, leaving Uncle Norman to read his newspaper. Quiet settled over the living room, broken only by the crackling fire, gentled rain and the odd cawing of a single crow.

Posted by Susan Ward at 7:56 AM No comments: Links to this post 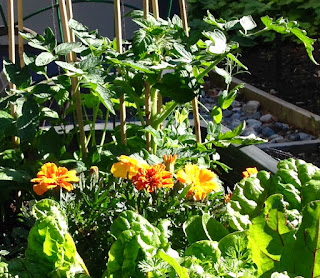 Investing in yourself……
A smart thing to do
But where is the money?
That’s what investors do.

Money is not what I talk about here ~
for dollars are one thing and sense is another.
Emotions unchecked can cost hours or days.
Time spent unwisely an unseemly bother.

Kindness and gratitude bloom from our hearts
planting wee, tiny seeds in mind, body and soul
simplicity found in each moment we live
is investment enough for ourselves to be whole.

“Every moment of one’s existence,
one is growing into more or retreating into less.”
~ Norman Mailer

Posted by Susan Ward at 9:18 AM No comments: Links to this post