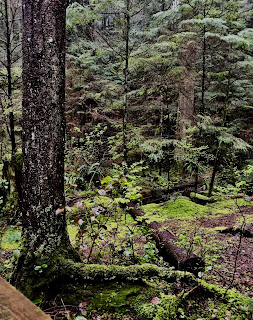 Journeys often begin with some trepidation…….

Outside of the comfort zone of…….
Upsetting the balance of…….
Routines established over……
Never varying except when……..
Evermore to challenge a status quo
Yearning for something more, anything……..
Standing tall and taking a deep breath………

“In the middle of the journey of our life I came to myself
with a dark wood where the straight way was lost.
~ Dante Alighieri, Italian poet (1265-1321)

Posted by Susan Ward at 10:39 AM No comments: Links to this post 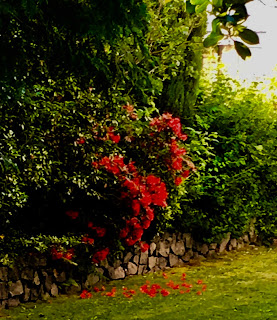 Posted by Susan Ward at 10:42 AM No comments: Links to this post 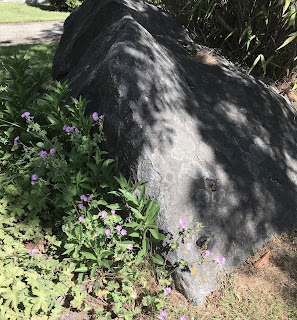 Inspiration for any form of writing comes from curiosity, imagination, memories, experiences, emotion and lots of elbow grease. All mixed and blended, or maybe tossed and turned, characters and story step forward from other lives. Aside from the many other forms of writing, this blog entry is about a particular story I wrote in June of 2007. Three events over the last twenty four hours gave me the inspiration for this morning's blog post. None had little significance at the time, but in combination for my writing life, of great significance. The first was when I read a relatively short story I had written in 2007 while clearing the clutter of an old journal. The next event, a very humorous YouTube interview with Neil Gaiman, a prolific author of fantasy and sci-fi for novels, comics and movies. In a Q & A, he was asked where inspiration came from and did provide the answer that really, there is no answer. The third occurrence for me, more of a recognition than an event, was the realization that my journalling, while in the past allowed me to write little stories and musings, had returned to little more than the proverbial ‘brain dump’. Not really very inspired! In that journal entry, I did muse on the inspiration for a story I had just penned, suggesting to myself that it was ‘probably the pair of boots I saw last night'.  I slept on all of it to waken this morning with the concept for this post, including my story. Edited and newly titled, here is Scuffed and Worn:

The tall black leather boots with once shiny silver buckles up the sides stood at her bedside. They had once been stiff with newness and pride. Scratched and worn, they fell over open themselves, the leather soft with age and wear. Emma sat on the edge of the bed, her hands holding her up, elbow locked. Her thin, dank hair hung down in greasy strands covering her face and shoulders. She had once been proud and tall too. Tears dripped, mingling with old makeup and sweat from her brow. Her room was hot and stuffy. The sheets were soaked. Crumpled cigarettes and scattered tobacco seemed to have escaped the dampness. It didn’t matter though. Maybe sunlight would help and maybe someone out there would have matches. Dragging the only piece of comfort into her trembling hands she stuffed the cigarettes into her pocket, being careful not to break another one. She had only three left. Emma pulled on the boots which had come with her on her travels into the darkness of the street. Where she once strode, tall, proud and confident down the catwalks of NYC and London, now she was barely able to hold herself up against the wall. The boots were heavy and, with buckles undone in her haste to get away from the smell of sweat, they were poor support for her trembling body. A last piece of rebellion and a fading ember of her old fire insisted that she wear them, no matter who told her that she would ‘break an ankle someday!’.  Every bone in her body had been broken from time to time over the years since she walked the world’s catwalks  lined by flash bulbs capturing her life and passion. She was now back in this dark and frightening place to detox once more from all the chemicals she knew were killing her. With a quiet, choking sob, she also knew that they were the only things that made her feel normal. Only now, it only made her seem normal inside her head and she could only function for the short times when the chemicals coursed through her body. It was becoming harder and harder to find them. Dealers were always demanding more of her or of any money she had. The first time that she used - oh, what an awesome feeling that had been. There had been no words to describe it. It was a feeling that effortlessly lifted her past off and away. All the mundane parts of those catwalk days vanished as though never there. She only wanted to know the crowd applauding and the flash of camera lightbulbs. It was so close to the feeling that cocaine had given her. It was the preparation before her grand entrance that she had railed against. There, in the little patio area with the sunshine on her back, warming her cold, cold bones, she was lost in the haze of memories. She let the cigarette smoke fill her lungs and wrap around her head. The long catwalk. Her dressing room. The dresses and ensembles. Tears welled up in her eyes. That was where she got her boots. A gift from one of the couturiers. The only one who had treated her kindly and gently. They were beautiful together. Just like her boots. A matched pair., He had been everything to her. Had literally clothed her in all the finery that he created. Tears were now streaming down her face as she remembered that her first hit of cocaine had come from that kindness. Since then she had been trapped. Once the cocaine called more insistently than bright lights and audience adulation, the catwalks of NYC and London dwindled to fashion shows in smaller and smaller centres until she was more than just a model - to men and women alike. Never had she been approached by clients when she had been on the big stages. The models were protected from unwanted advances. With that first offer of cocaine, also came the suggestion that there would be more. And there was more, but only more heartache to be numbed and drowned, and with more than just cocaine........

“The process of writing can be magical…Mostly
it’s a process of putting one word after another.”
~ Neil Gaiman, (from Goodreads site)

Posted by Susan Ward at 11:28 AM No comments: Links to this post

Second hand smoke is a real bother. Like flying bugs swarming around your face while one is trying to breathe. Definitely the smoke that people inhale into tender lungs has a more immediate impact to the smoker. In my perusing of journals and exercise books from twelve years ago, I came across this challenge to another trail of tar from nicotine. What prompted this writing I’m not certain. I suspect it was the smokers I saw that day, until, as is my habit, a stream of consciousness took over and spun a bit of fanciful reality. The quality of such unedited writing is often variable, especially when I can't read my own writing, so I've tried to spruce it up a bit.

Eight men smoking, lined up against the dark brown brick of a shopping mall. Different heights, ages and ethnicities. They are all gone now. Only a few stray cigarette butts left on the sidewalk. The air is clean and clear. The rain has settled the smoke onto the sidewalk where we will only wear the tar on the soles of our feet as we walk to and from the mall. No smoking outside, but nicotine tar inside where it will be taken into homes and family. But mostly on mops and in buckets when the janitors clean. Does the rain wash the sidewalks tar into the gutter?

“There’s a fine line between a stream of consciousness
and a babbling brook to nowhere,”
~ Dan Harmon

Posted by Susan Ward at 10:58 AM No comments: Links to this post 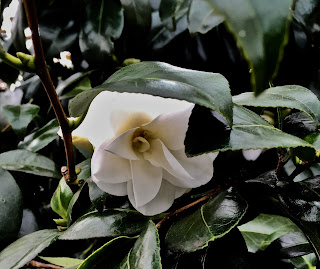 Locked in to
body memories from
faithful learning
of walking and talking
fitting in and belonging to
growing and changing
to be chipped at
scraped at
peeled away
keeping qualities while
letting go of trip wires
learning to re-shape all
lessons birthed and grown
to fit the beautiful, confusing
open spaces of retirement.

“Whatever happens to your body, your soul will survive, untouched……”
~ J.K.Rowling, Harry Potter and the Deathly Hallows

Posted by Susan Ward at 10:23 AM No comments: Links to this post 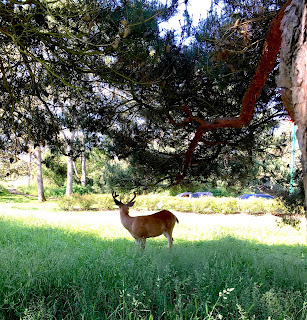 Being an urban deer is not the easiest thing. Having a delicious 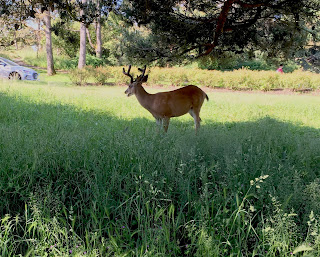 brunch in this lovely new grass in this particular shady spot set me up for any passersby with their click click whirrs. Cars whizzing by at least didn’t stop. They’re just noisy, but I’m used to their rumble and grumble. As long as I don’t hear them screeching. Always suggests I’m in a really bad place. I thought if I just kept on eating, the two humans that stopped and crept toward me would get bored and move away. But, oh no. I should have known better. My mother warned me. One human on the hard walking side and another sneaking up through the grass just before the trees. They probably didn’t think I was paying attention. They seem pretty harmless so I’ll just go back to this really, really quality grass. They can keep walking or not. I’m hungry. 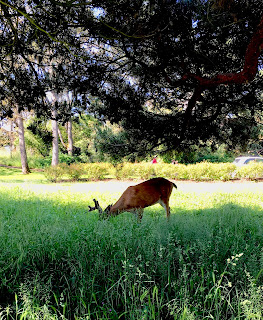 “Circumstances may cause interruptions and delays,
but never lose sight of your goal.”
~ Mario Andretti

Posted by Susan Ward at 2:00 PM No comments: Links to this post

To play with words
and ideas, like
following many
bouncing balls that
pop and splash in your face
revealing themselves
as shiny bubbles merely
floating on errant breezes
with ephemeral qualities
when allowed to land
gently in your hand
to tell a story,
write an essay or
tap out this silly muse,
is really a lot of fun!

“Two bubbles found they had rainbows on their curves.
They flickered out saying: “It was worth being a bubble,
just to have held that rainbow thirty seconds.””
~ Carl Sandburg

Posted by Susan Ward at 10:02 AM No comments: Links to this post