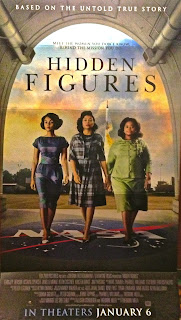 NASA, the Space Race, and genius mathematicians. Most of us, of a certain age, have seen the first space flight by the Russians and the bar that was set for the American space program. The race was on in earnest. Three women stepped up and into this world with little hesitation.  Katherine Johnson (Taraji Henson), Dorothy Vaughn (Octavia Spencer) and Mary Jackson (Janelle Monáe) confronted not only the racism of the 1960’s, but lack of recognition as women and the introduction of IBM computer systems. Pre-IBM, women employed by NASA to do the mathematical computations for space flight missions, were known collectively, and rather dismissively, as 'computers'. Despite these challenges, these three women maintained and built family life, and continued to move forward educationally and within their careers. They each carved their niches within NASA - an all white, mostly male world where there were Colored Bathrooms and Colored labels everywhere. When a project was given direction or thanks, the women, whether black or white, were not recognized - always expected to work just as hard. As Katherine Vaughn would say - ‘make yourself indispensable’.

Al Harrison (Kevin Kostner), a character mostly based on Robert C. Gilruth, the head of the Space Task Group at Langley Research Center at Hampton, Virginia, recognized mathematical genius, not necessarily black or white, male or female. I thoroughly enjoyed this movie. Was this a fun movie? Their stories showed the laughter in family life, some amusement when milestones were reached over top of male egos and some very precious romance. This story, a piece of unspoken history, is based on the book Hidden Figures written by Margot Lee Shetterly.

“Their path to advancement might look less like a straight line
and more like some of the pressure distributions and orbits
they plotted, but they were determined to take a seat at the table.”
~ Margo Lee Shetterly, Hidden Figures, The American Dream
and the Untold Story of the Black Women Mathematicians
Who Helped Win the Space Race

Posted by Susan Ward at 8:59 PM No comments: Links to this post 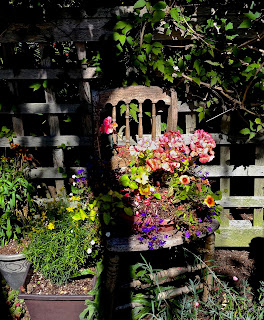 Some people think
Fun
Is silly
All hearts and flowers

“Care about what other people think and you will always be their prisoner.”
~ Lao Tzu

Posted by Susan Ward at 11:50 PM No comments: Links to this post

A Bit of a Scream! 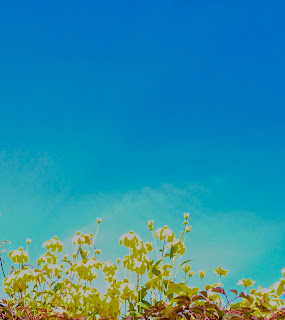 “But why is it fun? When you scream it just makes my ears hurt.”

“It’s fun because all the bubbly feelings inside of me go flying out into the air and up into the sky.”

“You would think it best to save your breath for running,
but I often find screaming helps.”
~ Mark Lawrence, Prince of Fools

Posted by Susan Ward at 11:57 PM No comments: Links to this post 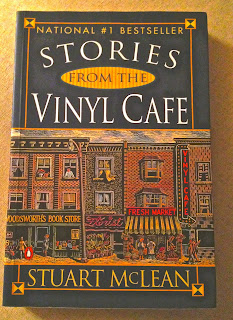 Until I heard the sad news that Stuart McLean had died, I had been struggling to know what I’d write about tonight. It did take me a bit to make the connection with this month’s theme of fun. Since 1994, Stuart McLean has regaled the country, and via the internet, people around the world with fun and humour. Every story, when I’ve listened to his rolling, expressive voice, brought smiles, and many time outright laughter to me. Even on days when things weren’t going so great. Stuart impressed me with his obvious kindness and openness to his audiences, his rambles throughout communities before his shows and gentle way with all ages of people. The Arthur Awards were always fascinating. My copy of an edition of Stories from the Vinyl Cafe has been pulled from my book shelf and will be my bedtime reading for the next couple of weeks. Rest in Peace, Stuart and thank you for the fun you brought into all of our lives.

“After a while, each death feels like all the deaths,
and you stand there like everyone else has stood there before you,
while the big wind of sadness blows around and through you.”
~ Stuart McLean, (from a Dave and Morley story)

Posted by Susan Ward at 10:07 PM No comments: Links to this post 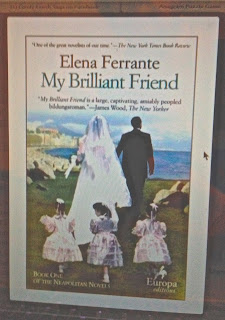 I read My Brilliant Friend over three days. I started Sunday afternoon and finished this morning around 9:00am. Originally, it was because I left this reading to the last minute. I had been told it was a dense read. When I checked some Goodreads reviews, some people didn’t even give My Brilliant Friend any stars, while many gave it five stars. Settling in to read, I was at first rather unsettled by the poverty, the violence of the children, to the children and to each other in this small Naples community in the 1950’s. The cast of characters is large, with the two main characters being good friends. At twelve years of age, Lila is tough and mean, and Elena, timid and shy. The remaining characters are the children and parents of several families. (This is where I need to tell you that I’ve left my copy of My Brilliant Friend behind today, so can’t refer to the exact number of families.) Names are similar, some having nicknames. There are three themes that run through this story - poverty, the accepted dominance of men and poor understanding about the value of education. There were some times of kindness and some of fun, but they seem fleeting within each life. Underscoring all of this is the violent nature of the struggle for community dominance, or just survival within the community. These themes show how difficult it was for people to move out of and away from this very insular life.  Those people not willing or able to use violence, became quiet or devious. The discussion today brought forward all of these issues, with an especial dislike of the violence and female suppression, trying to understand the reasons. Was it cultural? How much did poverty play a part? Was it education or money that would move anyone out of the maelstrom that Lila and Elena grew up in?

I have always enjoyed stories that are about family dynamics. My Brilliant Friend is so much more. Family dynamics with the troubled and unsettled dynamics of this community in post World War II Naples. Will I read the next in this Neapolitan Series?  I definitely hope to, following this friendship from where it left off in late adolescence and onward.

“We were twelve years old, but we walked along
the hot streets of the neighbourhood,
amid the dust and flies that the occasional old trucks
stirred up as they passed, like two old ladies
taking the measure of lives of disappointment,
clinging tightly to each other. No one understood us,
only we two - I thought - understood one another."
~ Elena Ferrante, My Brilliant Friend 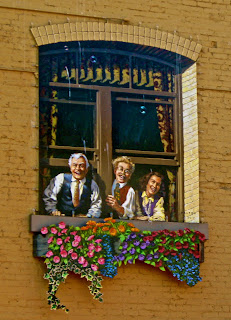 Andrew wanted me to get out there and be an activist. One of those guys that stood on a speaker’s corner and handed out pamphlet’s about how to change the country. We were retired. My busy world was supposed to be slowing down, and I thought Bill’s was too.

“So, Andrew, tell me what you’re doing. You don’t like this society any better. Lots of talk and you’re not doing anything about it either.”

“Look, Bill, sure I like to talk about it all and it really doesn’t look like I’m doing anything. I get called on this all the time.The stuff I do is really kind of invisible and I’ve gotta tell you, I can’t tell that it will change anything more than my little corner of this world. I’m not letting go of my opinions though.”

“That’s good to hear, but where is the fun in that? You’re not out there making a name for yourself.  Now that I think about it, I’ve started to attend community activities. Not all about politics, but just about being a more active member of the community.”

“Yeah. That’s the kind of stuff I do. There is a lot of fun in that. Being part of things that really are fun, or are just plain interesting. Things that make me feel connected and sharing opinions.”

“Are you ready to order another coffee or should we just call it a night?”

“I think we’ve solved all the world’s problems, so call it a night, it is. See you tomorrow at the Community Centre for the speakers on the new high rise going up soon? There’s going to be a couple of councillors on the panel.”

“Sounds perfect. Shall we ask the girls if they want to go out to supper first?”

“Many people are good at talking about what they are doing,
but in fact do little. Others do a lot but don’t talk about it;
they are the ones who make a community live.”
~ Jean Vanier, Community and Growth

Posted by Susan Ward at 9:10 PM No comments: Links to this post

An exercise on developing dialogue, this piece started with the first line: “Are you kidding me? We’re not ‘fine’!”

“Oh heavens, we are right now. But in a few minutes, we are going to be having fun!”

“Well right now, we’re not fine or having fun. Standing in line is neither. And it’s hot and noisy. Can’t we just go and have something to eat. I’m hungry.”

“Because I don’t even know, silly. Mom and dad just gave me this money, said it was for our next ride and told me what line to get in.”

“You know, I really love the midway, even if it is noisy and hot. It’s the music, all the delicious food smells and all the families having own fun. And of course the guys. Nobody I really want to know, just - Wow - good looking.”

“Come on, the line’s moving. We’ll lose our place if we don’t keep moving.”

“This line’s leaving the midway. Oh look! There’s a couple of thoroughbreds being saddled up. Do you think we could go over for a look at them after we’re finished here? I’ll wait to eat if I have to.”

“Oh! That’s where this line is going! We may not be riding in the ring, but…….those horses are amazing………we get to ride today!!!

“There is no surprise more magical than the surprise of being loved.”
~ Charles Morgan

Posted by Susan Ward at 10:59 PM No comments: Links to this post